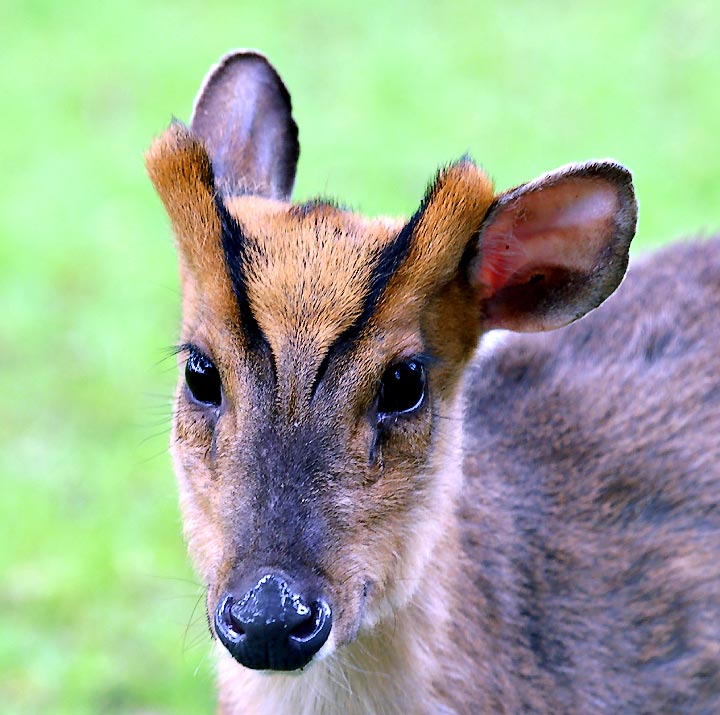 The Indian Muntjac is like all Muntjac species of deer a small and delicate looking animal. The body is small and compact, and the legs short and slender. Males are slightly larger than the females. This animal is often known as the Common Muntjac in addition to its more usual name of the Indian Muntjac.

The most distinctive feature of the Indian Muntjac are the distinct bony facial ridges it has. These are caused by the bony bases, known as pedicles, of the antlers, which extend down the forehead and onto the face. The pedicles for the antlers are often longer than the antlers themselves. Although only the males grow antlers, the bony pedicles are present in both sexes.

Only males grow antlers are these grow to only about 15cm in length and are short simple spikes. Sometimes the antlers have a single branch. The antlers are lost at regularly intervals by the males and regrown, but unlike in temperate living deer species there is no defined season for this to occur.

However the preferred weapon of the males are not the antlers but the there long canine teeth. The upper canine teeth are well developed and look like short tusks. These grow outwards from the lips in a distinct curve. These are used in fighting between the males.

The coat is made up of short soft hairs. The coat ranges from a greyish-brown to a dark brown in colour, sometimes there are creamy white patches. The head is small but the muzzle relatively long. Around the ears there is little hair. The pre-orbital tear glands found just beneath the eyes are well developed. An unusual feature of the Indian Muntjac is its long tongue, which it can use to lick its face and ears.

The Indian Muntjac is an alert little animal, when startled it emits a short barking alarm call. They will continue to give out these calls for some time after danger has past, sometimes for more than an hour.

There are 15 subspecies of Indian Muntjac. These are Muntiacus muntjak annamensis of South East Asia , M.m.malabaricus and M.m.aureus of India, M.m.bancanus which is found on the Billiton Islands, M.m.curvostylis which is found in Thailand, M.m.grandicornis of Myanmar, M.m.montanus known as the Mountain Muntjac of Sumatra, M.m.muntjak the Javan Muntjac of Java, M.m.nainggolani the Bali Muntjac, M.m.nigripes The Black-footed or Black-legged Muntjac found in China and Vietnam, M.m.peninsulaeo of Borneo and Malaysia, M.m.pleicharicus of Java, M.m.robinsoni of the Bintin Islands and Linda archipelago in Indonesia, M.m.rubidus of Borneo, and M.m.vaginalis which is found in Myanmar and southern China.

The Indian Muntjac is the most numerous species of Muntjac deer. They have a large distribution being found from India eastwards across south eastern Asia as far as Indonesia. They occur as far north as parts of Southern China. The countries they are found in include India, Sri Lanka, Nepal, Myanmar, Thailand, Vietnam, Malaysia and the Indonesian islands of Java, Sumatra and Borneo.

They inhabit areas of tropical forest. They prefer areas that have a thick and dense under storey in which they can easily hide from man and predators. The Indian Muntjac is not at any conservation risk, and in some places is considered to be a pest because it will feed on agricultural crops and damage trees by feeding on the bark.

In captivity they have a maximum lifespan of about 10 years, but in the wild there lifespan is much lower.

They feed on a variety of forest foods, including leaves, shoots, forest fruits and forest mushrooms.

Breeding can take place at any time of year. The young are born after a 200 to 220 day long gestation period. Normally only a single young is born. The young remain hidden in thick vegetation for the first few weeks of their life, before beginning to venture out with their mothers. At birth the young weigh about a pound. They are weaned at 2 to 3 months of age, and become fully mature from about 12 months of age. When they are fully-grown the young are forced to leave there parents territory and find one of there own.

The Indian Muntjac usually lives alone, but sometimes a male and a female will form a pair bond and live together. They are a territorial species of deer, and mark the boundaries of their territory with secretions from their pre-orbital eye glands. Males will vigorously defend their territories and the females that it contains from rival males. Sometimes fights between the males will take place over these territories, and during these fights severe injuries can be caused. The Indian Muntjac is mostly nocturnal in habits. It has a number of natural predators.