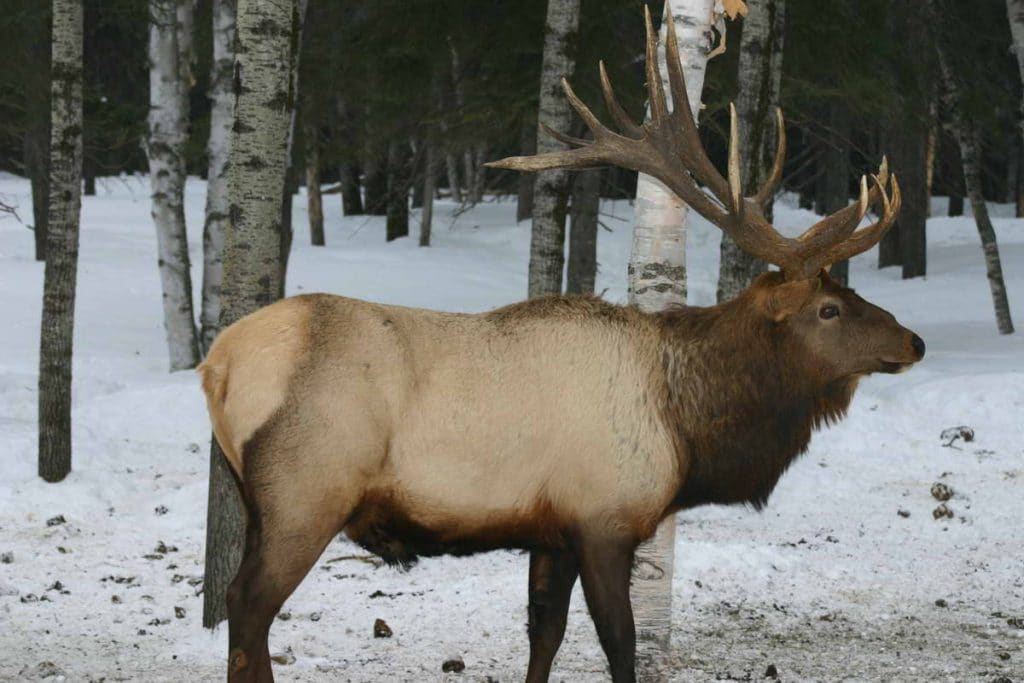 The Red Deer is a large impressive looking animal. The males look especially majestic when they have a full crown of antlers, and have long been associated with virility and strength. Although they are a large animal they are well proportioned. The body is slender and is carried by long legs. The neck is long and thin and the head graceful. Males are considerable larger and more heavily built than the females. The size and weight of Red Deer varies considerably across their geographical range, in Western Europe animals are much smaller than those found further east. Male red Deer are known as Stags, while the females are known as hinds.

During the summer months the coat is a rich reddish brown colour, and is sleek and shiny. The winter coat grows in October or November and is much longer and rougher in appearance, and is mostly a drab greyish colour. The winter coat is moulted each year at the beginning of spring around May. The under parts are usually a paler colour than the upper parts of the coat, as is often the head. There is no distinct rump patch although the hairs of the rump may be slightly paler than those of the back.

The ears are large, being oval in shape but ending in a pointed tip. The eyes are black, and are positioned well up on the head allowing the Red Deer good all round visibility. The tail is short in length, and the same colour as the rest of the coat. Like most species of deer the Red Deer has a number of glands around its body, with the pre-orbital ones below the eyes being the most prominent and noticeable.

Only stags have antlers. The antlers are used by the males when fighting with each other for access to females during the annual mating season or rut. The antlers are lost after the rut each January, but males begin to grow a new set almost immediately. The antlers are ready for use by the following August. Mature Red Deer can possess very impressive sets of antlers. The antlers are branched and have many tines. A typical fully-grown male will possess antlers with a total of 12 tines, but animals with as many as 20 tines are not unheard of. Young stags, and stags from areas with poor levels of food will not develop antlers of full size.

The Red Deer has one of the most widespread distribution ranges of any species of deer. They are found across a broad swath of temperate forest across Europe and Asia, and into North America. In North America they are often called Wapiti or Elk. They are also the only species of deer to be found in Africa, a small population living in the Atlas Mountains. 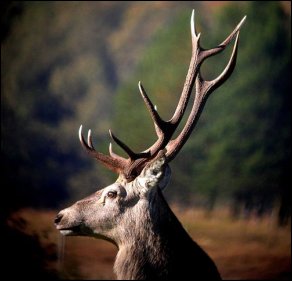 Red Deer are inhabitants of open deciduous woodland and forest. They prefer woodland areas that have many open glades and clearings where they can find enough food to feed. They are also often found in mountainous areas where they can feed at and above the tree line. Although across most of its range they are woodland living in some places they have adapted to living in different kinds of habitats. Red Deer in the Atlas Mountains of North Africa live in semi- desert mountain conditions; while in Scotland Red Deer have adapted to live on open moorlands. A famous population of Red Deer lives on the island of rum.

Red Deer feed mostly on various types of grass, but they supplement this diet with various types of herbaceous plants, twigs, shoots, and mosses. The composition of their diet depends to a certain extent on the season and which foods are avialbale at any given time.

In captivity Red Deer can live to be over 20 years of age, but wild living Red Deer have a maximum lifespan of about 12 years. Few animals are older than 8 or 9 years of age.

The Red Deer breeding season is known as the rut, and takes place in Europe between October and December. Males reach peak condition for the rut, their antlers being ready for use and bodies are flowing with male hormones. During the rutting season males are more aggressive and more active than at other times of the year. Males compete fiercely for the right to breed with males, with only the strongest and most powerful males being successful.

The stags attempt to collect together a harem of females with which to mate with. Other stags challenge males in possession of a harem; this can take place in a number of different ways. The first way in which stags ‘measure up’ each other is by bellowing. Rival males bellow at each other, the males who can bellow the longest and deepest are the strongest. These bellowing contests can last several hours, but are a good indication on how strong the opponent is. There is little point in a male continuing a contest further if it is obvious that he is weaker than the dominant animal. A challenging stag will walk next to a dominant stag, both animals sizing each other up. If the challenger believes he is not strong enough he will discontinue the challenge and walk away.

If the challenger believes he is strong enough to beat the dominant male, then the males will fight with their antlers. They lock their heads together and attempt to push each other back. Both animals try to use their weight to force the other animal off balance. These fights can be very aggressive, as both animals are usually fairly closely matched in size and strength. The fights can result in severe injury or even in death. If one of the stags succeeds in forcing his rival to lose his balance he may ram it in his flanks with his antlers, this can cause nasty injuries. Eventually one of the stags emerges as the winner, and the loser retreats, leaving the winner in possession of the harem. As you can imagine this takes up a lot of energy, and males quickly lose condition during the rut. Some males may lose so much energy that they do not have enough resources or stamina to survive the following winter. 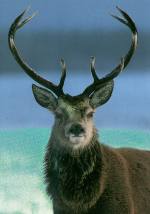 Red Deer have a pregnancy of about 220 to 240 days long. Young animals are usually born at the end of May or the beginning of June. Normally only a single young is born, but on occasion twins will be born. The newborn young have brown coloured coats that are dappled with white spots, these help to camouflage the calf in thick vegetation. For the first few days the calf lies hidden in thick vegetation, and is visited regularly by its mother to be fed. When the calf is strong enough it begins to accompany its mother back to the main herd. The calves are suckled for about 6 months, and usually remain with their mothers until they are about a year old and the mother gives birth again.

The Red Deer is a social animal and spends most of its life living in herds. There are separate stag ‘bachelor’ herds and female herds. Males and females lead separate lives for much of the year, only coming together during the annual mating season. The female herds are made up of small family units of a female and her young. Within the female groups there is a strict dominance hierarchy, with one female being the boss. Dominant animals decide where the herd will go and where it will feed.

The bachelor herds are much looser in structure than the female herds. There are no strong bonds between any of the animals. These herds are composed of males of a variety of ages. Old males may become more solitary in behaviour and wander off alone.

Red Deer are rather sedentary in behaviour and do not migrate or move around to any great extent. Most feeding takes place during the early mornings and late evenings, while the middle of the day is used for resting and digesting food.

Red Deer are very alert animals. In Western Europe their main predators have been exterminated, but in the east of their range and in North America predation is still a real threat, with bears and wolves being the main predators. However, these mostly take young animals, older Red Deer can normally escape predation because of their speed and agility.