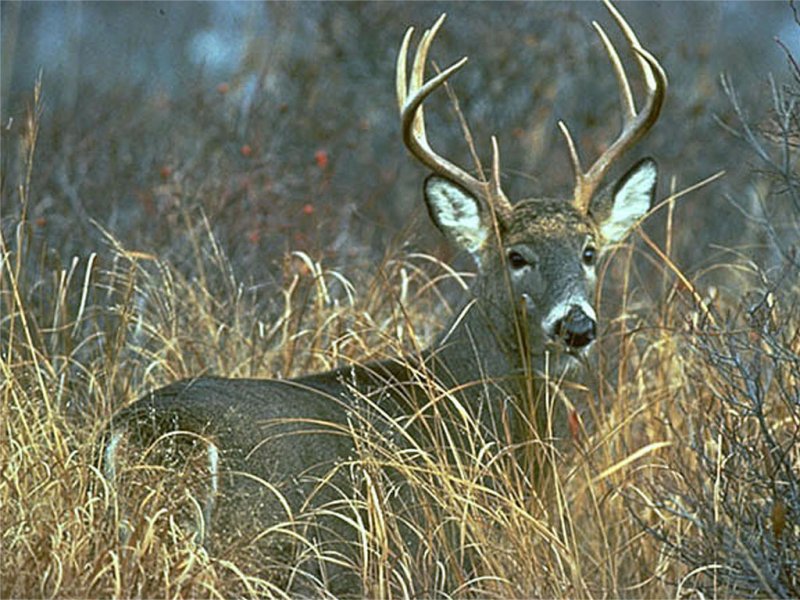 The White-Tailed Deer is the adaptable new world counterpart to the Roe Deer in Europe. Its size and appearance varies according to the geographical location in which it lives, with larger animals being found at more northerly latitudes, while further south the smallest kinds of White-Tailed Deer occur. The White-Tailed Deer is thinly built, and high legged, with a thin slender neck and gracile head. The tail is long and bushy, and as the name implies has a white underside. The rump patch is also white. The coat is a greyish brown colour during the summer, and in the winter is darker. There are often numerous white patches on the sides of the face and sometimes along the side of the body. The antlers are complex and many tined. They grow first outwards and backwards, before turning to point forwards and more inwards. There can be up to 15 tines, 3 or 4 of which point backwards.

This is a very adaptable species. Originally a woodland deer, it has adapted well to the changes made to the American landscape by man, and has successfully colonised agricultural areas, and is even found in some urban suburbs. The clearances of the north American forests and the production of more open forests has benefited the White-Tailed Deer greatly and has led to a large increase in its numbers. As well as this many of its former predators are either now absent or occur at much lower densities than before, meaning White-Tailed numbers remain high.

The White-Tailed Deer is found throughout North America, only being absent from parts of the southwest that are too arid for it to survive in. It is most numerous in the east, and it occurs from the north of Canada, to Florida, and southwards into South America. Because of their large distribution many subspecies have developed, those in the cold north being larger than those in the south. In Florida the smallest subspecies occur, and these weigh only about 25 kg. The deer living in the south of its range have a tropical lifestyle while those living further north have lives that are governed by the seasons.

During the winter months they gather together into large herds of many hundreds, but in the spring these large herds begin to break up. They can be active throughout the day and the night. When they sense an approaching predator there behaviour is very distinctive, they leap away with great leaping bounds lifting their tail high so the white underside is clearly visible. They also emit a distinctive whistling alarm call. They have a number of natural predators including wolves, coyote, pumas and jaguars. They feed on grasses and woodland herbaceous plants, they are also a pest species feeding on agricultural crops. 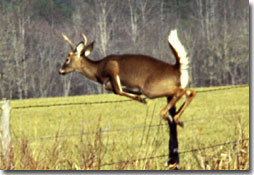 There reproductive cycle varies depending on the geographical location at which they occur. In north eastern America the rut takes place in November, but further south where they lie in tropical conditions reproduction can occur throughout the year. Fighting between the rutting males can be fierce. There are prodigious breeders, after a 7-month gestation period normally two calves are born, but occasionally 3 can be born. The calves stay hidden for the first few days of their life, being visited regularly by their mother to be fed. When they are able to accompany their mother they remain with her as she feeds. They are weaned at 4 months of age, but do not become fully independent until they are at least a year of age.