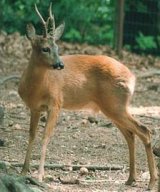 The pelage varies between the summer and winter months. In winter the fur is thick and long, and has a rather scruffy looking appearance. The winter coat is typically grey or greyish brown in colour. During the summer months the coat becomes much thinner and sleeker. In summer the coat is a rich brown colour. The winter coat grows from September onwards, and is moulted again the following spring in April or May.

During the winter months Roe Deer have a very noticeable large white rump patch. This is composed of long hairs that can be ‘puffed out’ to provide a warning signal when the Roe spots danger. During the summer the rump patch is much less noticeable. Unlike other species of deer the Roe has only a very short tail, which is often not much more than a few centimetres in length.

Roe Deer have a small delicate looking head. The muzzle is normally the same colour as the rest of the pelage, but the nose is a very distinct black colour. There is also a noticeable black ‘moustache’ of fur on the under lip. There are often white markings on the chin and upper throat. The ears are large and oval shaped, being ringed with black fur, the insides of the ears have soft white fur.

The Roe Deer has a number of scent glands that are used to mark territory. These are normally only clearly visible during the rut and then only in the males. There are scent glands on the forehead at the base of the horns, on the legs, and between the hooves of the hind legs. There are also some pre-orbital glands just below the eyes.

The Roe Deer has a large distribution range, and is found across temperate parts of Europe and Asia. They occur as far east as Siberia. Animals from the east of its range are larger and heavier than animals found in Europe.

The Roe Deer is a highly adaptable animal, which is found in a variety of different habitats. It was originally an inhabitant of woodland clearings and glades, preferring areas with thick undergrowth and dense vegetation. However, man has altered the forests of the temperate zones considerably, creating agricultural fields and breaking the thick forests down into smaller areas of woodland. The Roe Deer has adapted well to these changes and has successfully spread across fields and grasslands. It is most often seen along woodland edges, and in areas of scrub. Because of the Roe Deer’s flexibility and ability to spread quickly into new habitats it has become the most numerous of Europe’s deer species, and has a wide distribution. The Roe Deer is the most frequently seen deer across much of Europe. 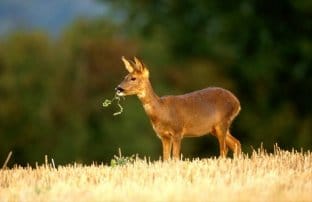 Lifespan
The oldest known wild living roe deer reached an age of 14 years, however, the average lifespan is usually about 8 years, and many animals do not even reach that.

Diet
Roe Deer feed on a variety of twigs, bark, grasses and bushes. They will feed on agricultural crops.

The breeding season or rut in Roe Deer takes place each summer between June and July. Rutting in the Roe Deer takes place much earlier than in other temperate living species of deer. Roe Deer have evolved a special technique which allows them to mate in high summer, but which still allows the young to be born at the optimum time in spring. They use a method called delayed implantation where the newly formed embryo enters a state of suspended animation. This allows the pregnancy to be extended allowing the young to be born in spring. During the rut males compete for access to females. When females become receptive to matings they are chased by males who want to breed with them. Males become especially territorial at this time and try to ward other males away from the females in their territories.

The gestation period is around 300 days long. Typically a single young is born, but twins sometimes occur. The young are born in May or June. After being born the young are left alone in long grass, with the mother returning regularly to feed them. Young fawns have a distinctive row of white spots across their flanks that provide them with camouflage in the long grass. These fade at about 2 months of age. The young grow quickly and are weaned at 2 or 3 months of age. They remain with the mother until she gives birth again the following year.

Unlike other species of deer the Roe is mostly a solitary animal. They normally live alone, or in small groups made up of a female and her young. Roe Deer often live in small territories of about 1 km square in size. However there behaviour changes throughout the year, with territoriality being lost in winter in some areas. In areas where they are not disturbed by man Roe Deer will be active throughout the day, but normally they feed in the mornings and late evening and rest during the day.