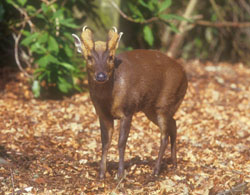 The Reeve’s Muntjac gets its name from John Russell Reeves, who introduced the deer into Britain in the 1830s. They are also known as Chinese Muntjac and as the Barking Deer. The Reeve’s Muntjac is one of several very similar species belonging to the Muntiacinae subfamily of deer. Muntjac deer are considered primitive to the other kinds of deer, and are characterised by their small size, distinctive hunched back and long elongated upper fangs.

The Reeve’s Muntjac is one of the larger Muntjac species. The coat is a dark brown colour, being longer and scruffier in appearance during the winter, while in the summer it is shorter and sleeker. The underparts are usually paler in colour, being a creamy white. The tail is long, and has a white underside. Only the bucks have antlers. These are short and just simple spikes, which grow from long bony pedicles at the top of the head. The antlers grow to a maximum length of 20 cm. Females do not have antlers, but do possess short bony knobs where the anlters are present in the males. The antlers are not the main weapons of the males; instead the well-developed upper canines are used in preference during fights. These upper canines are up to 5 cm long and hang down below the upper lip, and resemble fangs or tusks. The does also have well-developed canines but these are not as long as those of the males and so are not as noticeable. Bucks are slightly larger and heavier than the does.

Reeve’s Muntjac are well known for the distinctive bark like calls they give out. These can be emitted for prolonged periods of time. Barking is most common around the main breeding time, but can be given out at any time of year.

Like the other species of muntjac, the Reeve’s Muntjac is found in Asia. It is found in the countries of China, India, Malaysia and other Southeast Asian countries. It is a relatively common species. The Reeve’s Muntjac has been introduced into a number of European counties, including France and Britain. In Britain they are many found in the south, but have spread further north, mainly because of introductions by man.

The Reeve’s Muntjac is a deer of dense woodland thickets, preferring areas with thick dense undergrowth and good cover. Its small size allows it to move quickly around the forest floor.

The Reeeve’s Muntjac is mostly a browser, it feeds mainly on foods found on the forest floor, such as leaves, fruits, berries, and grasses. Most feeding is done at dawn and dusk.

The Reeve’s Muntjac has a maximum lifespan of 16 years, although normally they live no more than 10 years in the wild.

Unlike other deer species Reeve’s Muntjac are capable of breeding throughout the year, and are not restricted to a narrow rutting period. Males normally mate with females that are present within or close to their own territories, but sometimes two or three males may compete to mate with a receptive female. This results in ritualised fighting contests between the males using their antlers and canine teeth. These fights can become fierce and lead to severe injuries.

After a 210-day gestation period between 1 and 3 young are born, although twins are most common. The fawns are dark brown in colour, with a number of white spots along their flanks. After being born the female leaves the young in thick vegetation and goes off to feed. She returns regularly to suckle and care for the young. When they are old enough the young begin to accompany her as she feeds. Females are able to mate soon after giving birth, and so can be almost constantly pregnant.

The spots of the young fade with age, disappearing completely by the time the fawn is 2 months old. The fawn is weaned at 4 months of age. Shortly before the mother is due to give birth again she evicts her previous young from her territory. Young females become sexually mature at about 10 months of age, the males slightly later.

Reeve’s Muntjac live in small territories, which they defend from others. The territories are marked with secretions from the eye glands, with urine and faeces, and by marking vegetation. The male’s territories overlap a number of female territories. Males will fight intruding males fiercely using their antlers and canines to stab and bite their opponent. Reeve’s Muntjac tend to be fairly solitary in behaviour, although females are often seen accompanied by their young or by the resident male. Despite their small size the males are well capable of defending themselves against enemies using their canines. The alarm call is a short barking sound. They are most active at dusk and dawn, and can be active throughout the night, during the day they usually rest.