The Elk is the largest species of deer. It has a distinctive and easily recognisable appearance, which is unlike that of any other species of deer. Its stature is instantly recognisable, it having a rather humped back, long thin legs, and a large bulky head. Its body is short in length but large and bulky. The Elk has a rather front heavy appearance, the shoulders being well-developed and large in size. Males and females are similar in appearance, but males are larger and stockier than the females.

The coat is thick and coarse in texture. Most animals are a dark brown colour. The coat is fairly uniform in colour over the body. The coat is short over most of the body, except for around the shoulders where it is longer and forms a distinctive mane, which further emphasises the size of the front part of the body.

Elk have a large overhanging lip, this is used when the Elk is feeding to grab at tufts of vegetation. The tail is extremely short and often not even visible. Elk are extremely sensitive to sounds and smells. The ears are large and oval shaped, and are quickly pricked up when something is heard. Sight is not so important to the Elk and the eyes are correspondingly small in size.

Elk have the largest and heaviest antlers of any deer. Only the males carry antlers. The antlers can be up to 2 metres in length, and weigh as much as 35 kilograms. The antlers grow horizontally from head, and point slightly backwards. They have a broad palmate shape, often being described as being ‘shovel like’. However some Elk grow antlers, which are not broad, but more like the antlers seen in other deer species. The size of the antlers depends on the area in which the Elk lives, and the physical condition of the animal. Older more mature males have the largest sized antlers. The antlers are lost each year between December and March, and a new set begins to grow in April. The antlers are fully-grown and ready for use by August. 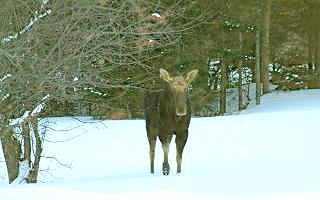 Elk occur in the northern forest areas of Asia, Europe and North America. They have a large distribution, occurring from Eastern Europe and Scandinavia across temperate Asia into Siberia. In the north Americas they occur in Alaska, Canada and northern-western parts of the United States. In Europe they are expanding there range westwards, because the hunting pressure has been reduced in these parts.

Elk are mostly a forest living animal. They are most often seen around woodland glades and clearings, or along forest streams and rivers. They also occur in more open habitats such as moorland, and marshland. In the summer months they will move away from the forest and onto the tundra plains.

Because of their large size, Elk must eat a considerable amount of food each day in order to fulfil their energy needs. It is estimated that they must eat about 40 kg each day. Therefore they must spend a considerable amount of time searching for and grazing on food. They eat a variety of green material, including leaves, mosses, ferns, grasses, herbaceous plants, and twigs.

In the wild Elk have an average lifespan of between 8 and 12 years.

Elk are polygamous, males mating with a number of females during the breeding or rutting season. The rutting season is between September and November depending on the location. During this time females come into season for 2 to 5 days long at a time. If the female is not successfully mated during this time she will come into season again about 3 weeks later. The main problem Elk have during the rut is finding mating partners. Elk are usually well spread out. When the female comes into season she emits loud bellow to attract males to her. When a male arrives it will mate with the female and remain with her until she is not receptive anymore.

Often two or more males will come together at a single female. In these cases the most dominant Elk wins possession of the female. Often one of the males will know it is not the most dominant and retreat, but sometimes if the males feel they are evenly matched they will fight over the female. The males may then lock antlers and take part in a pushing contest, the winner being the male who pushes his opponent away. When the female is no longer receptive the male leaves to find other females. In such a way a male may mate with several females during the rutting season.

The young are born in April or May after a gestation period of between 220 to 240 days long. Usually a single young is born, but up to 4 young may be born although this is uncommon. At birth the young weigh between 7 and 16 kg, and in colour they are a rich reddish brown. This reddish coat colour fades into the more adult darker brown at about 4 months of age. Young elk will start to eat green matter within a few days of being born, but are not totally weaned until they are at least 4 months of age. The females are usually sexually mature at 2 years of age. Although the males mature at a similar age, they are rarely large and strong enough to mate until they are 4 to 5 years old.

Elk are mostly solitary in behaviour, only coming together in the autumn at the rutting time. Females however, are often accompanied by their young. Elk are not territorial in behaviour. They live in large home ranges; the boundaries of these can overlap with those of other Elk. The Elk do not defend their home ranges in any way. If two animals meet they will normally ignore one another and soon move apart. Elk are mostly sedentary in behaviour, not moving any great distances. The only exception to this is during the rut, when males may move large distances in the search for females. In summer Elk may move around there home range in the search for food, but during the winter months when there is little food to be found they will find a sheltered location and spend much of the winter there.

Elk are mostly active during the early hours of the morning and in the late afternoons. During the middle part of the day they rest. Elk are excellent swimmers. They are happy living in marshy and wet areas, there feet being broad and allowing them to move easily through boggy terrain. 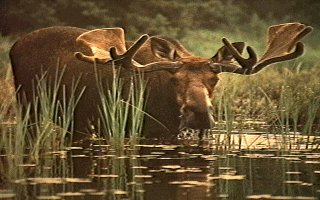