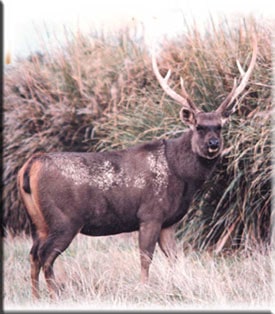 The Indian Sambar is a strongly built and large species of deer. Males are larger than the females. The coat is long and thick, and in colour is a dark brown. Males have a thick mane of hair around the neck. The antlers are especially impressive, reaching a length of in excess of 90 cm; individuals with antlers larger than 140 cm in length have been reported. The antlers have 6 tines, and are strongly pearled. The eye tine is well developed, as it is in the Philippine Sambar. The tines from the backwards-pointing branch of the antlers are considerable smaller than the forwards pointing tines. The Sambar has large eye glands.

The Indian Sambar is mostly found in damp woodland environments, favouring locations near to marshes and woodland swamps. When the antlers are in the velvet stage of their growth, the Sambar moves into more open habitats such as woodland glades and clearings. They are found at altitudes as high as 3000 metres.

The Sambar is one of the worlds most widely distributed types of deer, with various Sambar species of deer being found throughout Asia. The Indian Sambar is found throughout India and the Indian subcontinent. Larger individuals occur in central India, with animals closer to the coast being smaller in size.

Sambar are more solitary in their ways than other species of deer, mostly living alone, or in only very small groups. They are mostly nocturnal in their habits. They have very well developed senses, and are able to easily detect predators. When alarmed they have a repetitive honking alarm call. When fleeing they raise there tails so that the white underside is clearly visible. Sambar have a number of predators, including the tiger. They are one of the favourite prey animals of the tiger. There diet is mostly composed of leaves and various species of grasses.

The rut takes place between October and November in most parts of India. The exact timing of the rut and birth of young depends on the location the deer lives in. Males establish territories, which they defend from rivals. They pair up with females who visit their territory. During the rut the males have a loud bellowing rutting call, which is quite distinctive. The gestation period is long, being about 8 months, after which normally a single unspotted calf is born. For the first few days of its life the newly born calf remains hidden in thick vegetation, and is visited occasionally by its mother to be suckled. Later, it begins to accompany the mother when she goes to feed. The young are weaned at about 7 months of age, and become fully independent at about a year of age.