The Chinese Water Deer is one of Britain’s smallest species of deer, and is only slightly larger is size than the Reeve’s Muntjac. They have a distinctive stature, the back is rounded and arched with the rump being higher than the forequarters. The legs are slender, with the hind legs being longer and sturdier than the forelegs. Both sexes are similar in size, although the males or bucks are slightly heavier than the females or does.

As has already been mentioned males do not grow antlers. However, like most of the Muntjac species of deer bucks have well developed canine teeth. The bucks use these when fighting with other bucks, or when defending themselves. They are especially sharp, and capable of causing severe injuries on opponents. When fighting the tusks are used for stabbing or slashing. In old animals the tusks can be broken or show visible signs of wear and tear. The canine teeth can grow to 6 cm in length and protrude down from the upper lip. They are often described as being fangs or tusks. Females also grow tusks, but they are much smaller than in the males, mostly being only 1 to 2 cm in length. The tusks of the females are rarely visible. The tusks have a special muscular hinge, which means they can move slightly to make grazing easier.

In winter the coat of the Chinese Water Deer is a dark greyish or light brown colour. The winter coat is long and scruffy looking. Usually the coat looks rather mottled in colour, and this is because the hairs are pale at their base but darker at their tips. Often the coat is interspersed with darker hairs. The hair on the flanks and back is longer than that over the rest of the body. The winter coat is moulted between April and May and replaced by a much smoother sleeker looking summer coat. The summer coat is much brighter in colour than the winter coat being a uniform dark brownish colour.

The head is small and tapers towards the nose. The ears are large in size, being oval shaped. The nose and eyes are black in colour. In colour the head is usually a dark brown or a creamy grey colour. Males often have darker facial features than the females. There is often a white band of fur around the muzzle, and white patches of fur around the chin and on the throat.

The tail is 5 to 15 cm long. There are no white rump markings as is seen in many other species of deer.

The Chinese Water Deer has a number of glands around its body where scent secretions are made. These are most commonly used to mark territorial areas. The pre-orbital glands are found in front of the eyes, and in the Chinese Water Deer are small. There are also glands between the hooves, and on the back of the legs. The Chinese Water Deer is unusual in having glands on wither side of its groin, a feature that is not seen in other species of deer.

The Chinese Subspecies is mainly found along the Yangtze River, where small populations are found by the Dongting, Poyang and Taihu lakes. They are also found in some coastal regions and on the Zhoushan islands. The Korean subspecies is found in North and South Korea.

The Chinese Water Deer was first kept in Britain in 1873, when they were kept by London Zoo. In the 1890s they began to be kept at Woburn Abbey in Bedfordshire, and from the 1920s at nearby Whipsnade Zoo. They bred well here and eventually escaped to found wild populations. They have spread into suitable habitat in Cambridgeshire, Norfolk and Suffolk. There distribution remains quite small and restricted though, and they have failed to spread out of these core areas. This is thought to be because of their strong habitat preferences. The areas that they have colonized are low-lying wetland areas, which are similar in character to their native habitats. They have failed to spread further a field. A small wild population is also found in France.

Chinese Water Deer live in areas of open swampy grasslands in their natural homes in China and Korea. In Britain they are mainly found in swampy areas, reedbeds, and close to rivers sides. They are also found on agricultural and woodland areas close to these wet areas. 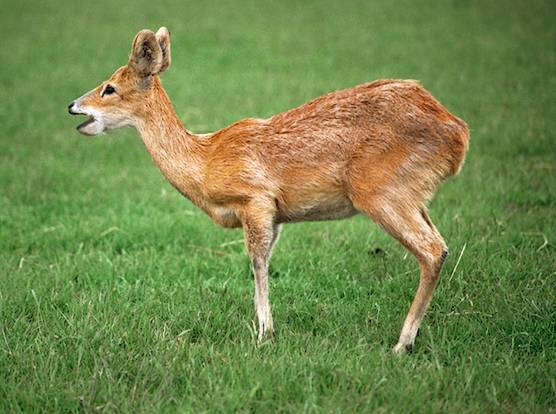 Like other species of deer the Chinese Water Deer is an herbivorous ruminant. Chinese Water Deer are highly selective feeders, taking the most nutritious foodstuffs that are available. They prefer to feed on rich shoots, herbaceous plants and grasses in preference to poorer quality coarser foods. They feed on a wide variety of plants including grasses, shoots, woody stems, herbaceous plants, brambles and aquatic plants. They have a wider diet in summer when more foods are available than in the winter. Most feeding takes place at dawn and at dusk.

Most wild living Chinese Water Deer live to be no more than 6 years of age, however it is known that they can live to be over 10 years of age. The rate of mortality is especially high for young animal, with a very high percentage dying in their first year.

The Chinese Water Deer can be an extremely prodigious breeder. Litter sizes can be impressive, with up to 8 young being born, this is however exceptional. Usually litters are much smaller in size, with mostly between 1 to 3 young being born. Litters with 4 young are however not too uncommon.

The mating season, known as the rut or rutting season for deer species, occurs each year between late November and early January. During the rutting season males establish small territories, which contain a single doe. The bucks mate with the doe as she comes into season and is receptive. Bucks fight amongst themselves for the best territories, sometimes using their sharp canine teeth. When in possession of a territory, bucks will fight intruding males. The bucks mark their territories in a number of ways. Faeces and urine are used, and secretions from the eye glands are rubbed onto bushes or trees. The bucks will sometimes dig small scrapes in the ground, which they then urinate on.

Unlike many other species of deer there is a distinct process of courtship between the buck and his doe. Males have a whistling courtship call which they use to attract the female. Before mating with the doe, the buck will smell the female to judge whether she is ready to be mated, this is done with a ritualised display where the head is rocked from side to side. If the buck believes the doe to be in oestrus he will then mount her and mate with her. The males and females will remain together for 2 to 3 months.

The young are born the following May or June after a gestation period of between 200 and 210 days. The newly born young weigh about 1kg, which given the low weight of the adult females is quite heavy, especially when more than one young is carried. The young are spotted at birth, but these spots fade at about 8 weeks of age. After the birth the young are hidden in thick vegetation. When more than one young is born each one is hidden separately on its own, but in the same vicinity as its siblings. This is safer than all the young hiding in the same place. If a predator were to find the young when they were all together they would all be killed. If they are hidden separately although a predator may find one of the young, there is a chance that the other siblings would escape detection and thus survive. A case of not leaving all your eggs in one basket.

Most activity is concentrated around the hours of the dusk and dawn. This is when most feeding takes place. Throughout most of the day Chinese Water Deer hide and rest in dense vegetation. When alarmed they emit a loud bark like alarm call and quickly run away.

They lead a mostly solitary life, for much of the year living alone. An exception to this however, is in areas where particularly high densities occur, and then sometimes they live in pairs. During the rutting period in late winter they become more sociable and are more frequently seen together. At this time the pair bonds between the males and the females are formed. Sometimes in the winter month’s large groups may collect in places that are an abundant source of food such as on arable fields.