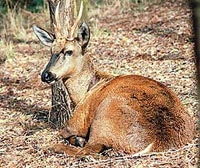 The South Andean Deer is also known as the Chilean Guemel and as the Chilean Huemel. It is similar in appearance and behaviour to the North Andean Deer, to which it is closely related. It is a small species of deer, with short legs and a thin slender build. The coat is made up of thick course hairs that make the coat look particularly rough. In colour the pelage is a greyish-brown. The tail is short with a white underside. The under parts are paler in colour, and there are often white markings around the throat. The ears are large and rounded with white fur on there insides. The antlers branch from a small stem, and have a number of tines. This is the main difference between this species and the North Andean Deer, as in that species the antlers branch much closer to the head and have fewer tines. The South Andean Deer is slightly darker in colour than its northern counterpart.

The South Andean Deer was previously found over most of the southwest of the continent of South America. Its range covered the Andes mountain range in Chile and parts of the Pampas in southwestern Argentina. Unfortunately due to over hunting and habitat loss numbers have fallen dramatically, and now it is rarely found outside of protected areas. Only about 2000 animals are thought to remain.

Little is known about the reproductive behaviour of this species. The rut takes place in the late autumn months, and after a gestation period of about 230 to 240 days mostly a single young is born.

They live in small groups of 2 to 3 animals; these groups are made up of a female and her young. Many animals live solitary lives. The South Andean Deer feeds on a variety of grasses and herbaceous plants found within the mountainous and grassland habitats in which it lives.