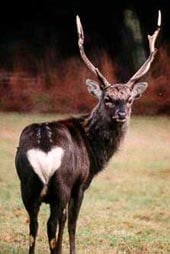 The Sika deer is a rather elegant looking animal. They have strong solid bodies which are carried on long slender legs. The head is small and is carried by a short but bulky neck. The Sika deer is similar in stature to the Red Deer, but is slightly smaller in size. Males Sika Deer are commonly known as Stags, and the Females as hinds.

There can be considerable variation in the colour of the coat. But typically during the summer animals have a dark chestnut brown colour upper coat, this is marked with 7 or 8 rows of white spots. The undersides and lower neck and throat are white in colour. During the winter the coat is longer and thicker, the coat becomes darker and the spots are not as clearly visible. The winter coat is moulted in early spring in April or May and regrows again in the late Autumn.

Both sexes have a distinctive large white rump patch, which is surrounded by a rim of black fur. This can be puffed out to signal when danger is near. On the head there are white markings on the chin and lips. The insides of the ears are white, but there is also a large black ‘thumbprint’ marking that is distinctive in this species. Sika Deer have a remarkable whistle like call, and can often be heard whistling softly to each other.

Originally the Sika deer was distributed in eastern Asia, being found in Vietnam, Japan, Taiwan, the Ussuri area Russia, and the Chinese province of Manchuria. The Japanese subspecies of Sika Deer were introduced in to Europe in the 19th Century as parkland deer, subsequently escaping and in some places forming wild herds. 5000 are thought to be wild in Europe, with a much greater number being found in parks. In Europe they are found in the countries of Britain, Ireland, Poland, Czech Republic, Denmark, Germany, Austria and Russia. They are found only in scattered location in Europe, but in Asia they have a more widespread distribution. They have also been introduced into New Zealand and the USA.

The preferred habitat of the Sika Deer is deciduous or mixed woodland, especially that which has a good under story of vegetation. This type of habitat provides it with a good variety of foods from which to feed on. However, they are also found in a number of other types of habitat. They will also inhabit areas of young coniferous woodland, especially where there are many open clearings and glades.

In captivity Sika deer can live to be over 20 years of age, but in the wild such high ages are seldom reached. In the wild animals will be lucky to reach 7 years of age.

The Sika Deer feeds on a variety of woodland plants and grasses. They will feed on more herbaceous plants than the Red Deer. 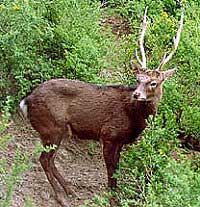 In Europe the breeding season or rut for Sika Deer takes place between September and November. Sika Deer can increase there populations rapidly, this is because many females conceive each year and because in fact mortality is relatively low when compared with other species of deer.

The rut is a time of much activity for Sika Deer. At the beginning of the rut animals move to traditional rutting grounds, and here males compete with each other for small breeding territories. The fighting between males is typically highly ritualised. The males in possession of the best territories are able to collect together the greatest number of females and thus mate the most.

The young are born after a gestation period of about 220 days long, with a single fawn usually being born, typically between May and June. At birth the young weigh from 4.5 to 7 kg. They are a dark brown colour, with numerous white spots, these disappear as the winter coat grows and cannot usually be seen after about 3 months of age. The young lie hidden in concealed vegetation for the first 2 to 3 weeks of their life, before beginning to accompany their mother. The young leave their mother shortly before the birth of their next young. The males go to join male bachelor herds, while the females form small groups.

The Sika Deer is a social herd living animal. However, it’s the social structure of its herds can vary at different times of the year and in different locations. The males live either in small bachelor groups, or live solitary single lives. The older males tend to be more solitary in behaviour than younger animals. Females live in small herds with their young. Sometimes mixed herds may occur. The Sika deer is mostly active at dusk and dawn, resting during the middle part of the day and at night.