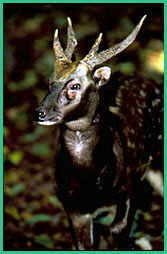 The Philippine Spotted Deer is also known as the Visayan Spotted Deer and as Alfred’s Deer. It is a small short-legged deer, similar in appearance to the Sambar species of deer. The most distinctive feature in this species are the many large rounded spots which are scattered over the dark brown flanks. The under parts are paler in colour. There is a white patch of fur on the chin, and the insides of the ears are also white. The eyes are ringed with paler coloured fur. The tail is short with a white underside. The males have short antlers of about 20 cm in length; these have a short brow tine.

It was previously found on a large number of islands of the Visayan chain in the central Philippines. However, because of over hunting it has become extinct on a number of these and only remains on 4 of the larger islands. It remains under threat from over hunting.

The preferred habitats of the Philippine Spotted Deer are clearings and glades in thick lowland tropical forest. However, because of deforestation to make way for agricultural land it is now mainly found on thickly forested mountain slopes that are too steep to cultivate.

The rut occurs late in the year between November and December. Males have a distinctive rutting call. The young are born after a 8 month gestation period in May or June. They are weaned at 6 months of age, and become mature from 12 months of age.

Little is known about this animal’s way of life. It is thought to be mainly nocturnal, emerging at dusk to begin to feed. It seems to be mostly solitary in its habits. They feed on a variety of different types of grasses. They have a maximum lifespan of about 15 years. Action will need to be taken to ensure this species is not hunted to extinction in the near future.