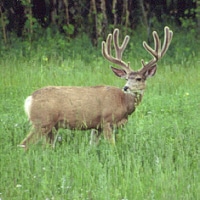 The Mule Deer is so named because of its large prominent ears, which are reminiscent of those seen in mules. They are also sometimes known as the Burro Deer. They are a large stocky species of deer, generally larger in size than their close relative the White-Tailed Deer. Males, which are commonly called bucks, are typically larger and heavier than the females or does.

The coat is a greyish to reddish-brown colour in the summer, while in the winter months it much darker and is a brownish-grey. The under parts are slightly lighter in colour than the upper parts. The rump patch is lighter than the rest of the coat, being a cream or white colour. There is also a white patch of fur beneath the throat. There is are dark mask like markings on the head, which run in a ‘V’ shape through the eyes. This is more distinct in the males than in the females.

The Mule Deer’s tail is different from that of the White-Tailed Deer’s. Although it is quite long, it is not bushy. In colour the tail is white, but has a black tip. The exact colouring of the tail can vary between individuals, with some animals having no black tip. A well-known subspecies of the Mule Deer is the Black-tailed Deer, which as its name suggests has an all black tail.

The antlers are shed each year in spring, between January and April. Younger bucks lose them a little later than mature males. The antlers regrow quickly, reaching their full size within 150 days. The antlers reach their full size when the buck is usually in there 3rd year. Mature bucks normally have a total of 8 tines, 4 on each antler, although it is common for bucks with fewer tines to be seen. The antlers branch into equally sized forward and backwards forks. The antlers can be up to 78cm long, and have a breadth of over a metre.

The Mule Deer is extremely adaptable in its habitat preferences. They will occupy nearly all types of habitat found amongst their distribution range. More open and drier habitats are preferred. Unlike the White-tailed Deer they are happy in dry arid locations, and are found in semi-desert and desert areas. They are also common in hilly and mountainous areas. Mule Deer will also live in woodland areas but prefer drier and more open woodland and avoid denser thicker areas of forest.
The Mule Deer has a wide distribution range, and is found over large areas of the western parts of North America. It can be found as far north as the Canadian Rockies, and its range extends as far south as the Mexican deserts. Mule Deer are not at any conservation risk. They are often hunted by man for recreation.

Lifespan
In the wild they have a maximum lifespan of 10 years, but in captivity they have lived to be as old as 25 years.

Mule Deer eat a variety of different foods, including twigs, shoots, grasses, leaves, seeds and berries. They are a selective feeder, and they will choose the most succulent and nutritious shoots and grasses on which to feed. The diet depends on the type of habitat in which they live, in more woodland areas a greater variety of food will be eaten than in desert areas.

Mating is polygamous, with bucks mating with a number of females. The timing of reproduction and the birth of the young varies according to where the deer occur. Northerly living Mule Deer have different reproductive cycles from more southerly living animals. Generally the rut takes place around October to mid December. During the rutting period single males are seen in possession of small harems of females, the males competing vigorously for possession of the females. Generally speaking the strongest and largest bucks have the most success at obtaining and holding on to harems.

After a 190 to 210 day long gestation period one or two fawns are born, usually in June or July. Younger does typically give birth to a single young, while older does normally have twin births. The fawns are left hidden in long vegetation for the first week of so of their life. After this time they are able to move around and begin to follow the mother doe. The fawns are spotted at birth, but these fade at about 2 months of age. At birth the young weigh on average 2.5 kg. Male fawns are heavier than females. The fawns are weaned at about 6 to 7 weeks of age. The young are sexually mature from about 18 months of age. Females normally conceive in their second year, however the bucks rarely get to mate before they are 3 or 4 years old.

Mule Deer live in distinct home ranges, where they remain for much of the year. However, in some areas Mule Deer may move in distinct patterns at certain times of the year in a form of migration. For example in colder areas they may spend the summer months in higher more exposed locations, only returning to lower more sheltered areas when winter and bad weather returns. In desert areas they may move around in response to rainfall patterns, looking for areas of new and fresh grazing.

The Mule Deer is a social animal, living in small herds of typically 3 or 4 animals. Males and females live separately in separate herds, only coming together during the rutting season in late autumn. Within the small herds there is a stroct dominance hierarchy. During the winter months it gathers in large herds, sometimes with hundreds of members. These large herds split up with the approaching spring, and for most of the rest of the year they live in small groups. Mule Deer are occasionally seen alone, and older males are more likely to become solitary in habits.

Activity is concentrated in the early mornings and late evenings. During the hot middle parts of the day Mule Deer rest and remain inactive in a cool quiet location.

The Mule Deer has a number of predators including the bear, puma, coyote and formerly the wolf. They are always alert to approaching danger. If a predator is spotted they will leap away with a distinct stotting location. They are able to run at speeds of up to 45 kph.