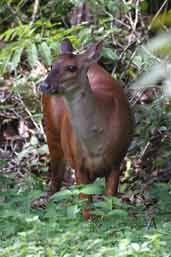 There are a number of Mazama or Brocket Deer species, all fairly similar in appearance and with similar lifestyles. They will be considered here together because of these close similarities, what normally applies for one species, applies in most cases to the entire genus.

Mazama deer are small forest dwelling deer. They can be considered as the American equivalents of the Duikers, sharing many traits, although they are unrelated to each other. They have small rounded bodies, with the hind parts being carried higher than the front parts. In colouration they tend to be a light or dark brown. The antlers are short fairly simple spikes, which tend to be kept a long time before being shed. There are 6 known species of Mazama:

Brocket Deer can be found throughout South America, where they have a wide distribution and are found everywhere apart form the Pampas grassland areas of the South East. The Red and Brown Brockets have wide distributions and are found throughout the continent, being very common. The Dwarf Brocket, Little Red Brocket and Merioa Brocket are found in the Andes region of the northwestern part of the continent, and have much smaller distributions. The Pygmy Brocket is found in south eastern Brazil and surrounding areas, while the Yucatan Brocket is found on the Yucatan peninsula of Mexico.
Habitat

Brocket Deer are predominantly woodland and forest living deer, although they will also inhabit more open areas that offer a good level of cover such as scrubland and thickets. They are well adapted to living in thick vegetation, being small in size, and able to quickly scuttle around the forest floor.

All the Brocket species of deer have similar lifestyles. They are shy and secretive animals, rarely seen because of their nocturnal habits. They are not gregarious, living either alone or in pairs. They normally live within a small territory, the boundaries of which are marked either with faeces or urine, or with eye gland secretions. They rely on their small size and knowledge of the habitat in which they live to escape predators, diving into thick vegetation when detected. They are predated on by a number of South American predators, such as puma and jaguar. They eat mostly foods they find within their forest home, including fruits, leaves and shoots. 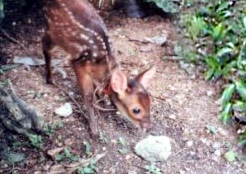 Males normally mate with females that live in close proximity to them. Males will compete with each other for access to receptive females by biting and trying to stab at each other with their short antlers. Sometimes they live in permanent pair bonds. Mostly the Brocket Deer are tropical living, and therefore have no fixed breeding season, but in more temperate parts of there range there is a distinct rutting season in the autumn months.

The gestation period is roughly 200 to 220 days, with normally a single young being born. This lies concealed in thick vegetation and is visited regularly by the mother until it is large enough to accompany her. The young are normally weaned at 6 months of age, and can reach sexual maturity from about a year of age.