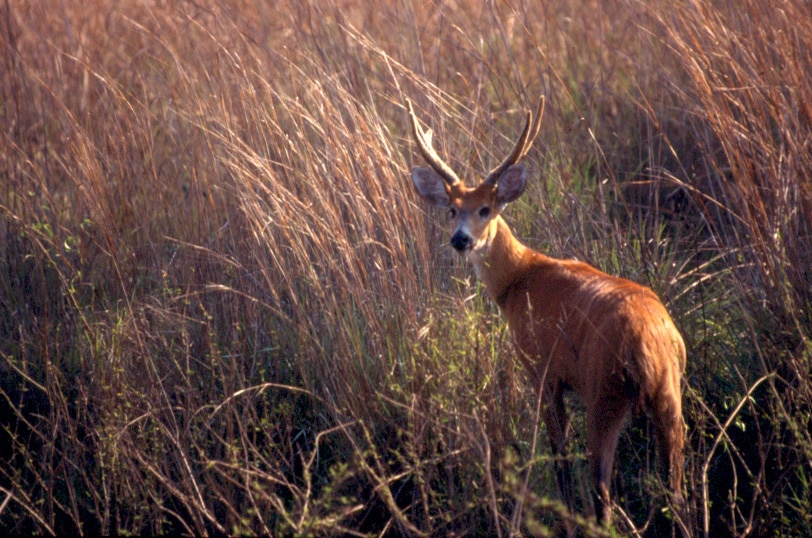 The Marsh Deer is the largest native species of deer found in South America. It is similar in size to the Red Deer. Its alternative name of the Swamp Deer reflects the types of habitat this deer lives in. The Marsh Deer has a shaggy coat, which is a distinctive red chestnut colour. The under parts and lower parts of the neck are paler in colour. The coat darkens during the winter months. The ears are large and prominent and stand out well against the coat being lined with white coloured fur. The lips, and the lower parts of the muzzle are black and also stand out well against the coat. Around the edge of the eyes is a slight ring of whitish fur. The lower legs are often a black or dark brown colour. There are no distinct rump markings. The tail is long and bushy and has a reddish brown colour.

Of note are hooves, which are very distinctive in this species. The Marsh Deer is well adapted to living in wetland swampy areas, the hooves being especially wide and broad, which prevents it from sinking into muddy ground. They can spread out to over 10 cm in width. The hooves have a special membrane between them; this is elastic in nature and may give the hooves greater surface area. The dew claws are especially large and add even further surface area to the foot. They can grow to up to 7 cm in length.

Males have large antlers that have many tines. Mature males often have antlers with 10 tines, but animals with more than 12 may be seen. The antlers grow to over 60 cm in length and weigh about 2 kg. As the Marsh Deer is a tropical living species of deer, there is no season of growth for the antlers, and they are grown and cast throughout the year. Some animals may keep their antlers for up to 2 years before they are lost and new ones grown.

As its name suggests, this is a wetland living deer, being found in swampy and marshland areas of grassland. It can be seen on grasslands that flood seasonally, and in areas that are marshy all year round. It prefers areas which offer it good cover for example areas where grass stands are high or where red beds grow. It is mostly found close to permanent sources of water. They are excellent waders and prefer areas with water levels of about 50 cm, although they will wade in areas where the water level reaches over a metre. When the water level gets too high they move to dryer higher locations, and often they are more susceptible to hunting in these areas.
Formerly they had a large distribution across South America, being found over a large part of the central Brazil southwards to northern Argentina. However, due to the expansion of agriculture in the area after the Spanish colonisation of the area, numbers and range began to fall. The grasslands were used to keep cattle, on large ranches; the native deer were squeezed out. Hunting also played a part on the decline of this species. The range and numbers of the species today remain unclear, but it is certain that it has disappeared from much of its former range.

Remaining populations of Marsh Deer are small and highly fragmented. They continue to be threatened with habitat loss and with competition from domestic livestock. When they come into contact with domestic animals they may pick up the diseases that they carry.
Only a small number are kept in captivity. A small herd of about 30 animals is kept in Brazil, but increasing their numbers is proving difficult. In Europe the only specimens are kept in Berlin zoo. They are classified as being vulnerable by the IUCN.

The Marsh Deer feed mainly on grasses and on water living plants.

Little is known about the mating season. In more southerly locations mating takes place between October and November, but on more tropical areas can occur throughout the year. I is unknown whether there is any aggression between the males. The gestation period is 240 to 260 days long, and normally only a single young is born. At birth the young are unspotted. The young are suckled for 6 months before being weaned. They remain with their mother for about a year, leaving when she gives birth again. Females mate soon after giving birth so are almost continually pregnant. The timing of mating and the births depends on the location, in more tropical locations births and mating may occur throughout the year. Fawns are mostly born between May and November. 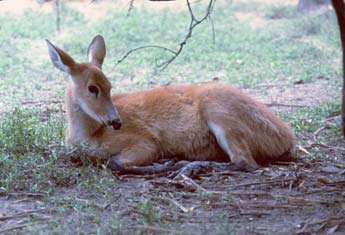 Little is known about the behaviour and lifestyle of this species of deer, and it has been little studied. They are active late in the evenings and in the early mornings. In areas where they are hunted or disturbed by man they are mostly nocturnal in behaviour.

Marsh Deer live mostly in pairs or in small family groups that are made up of 3 to 6 animals. However, some animals may be solitary on behaviour. During the wet seasons they become more scattered and widely distributed as available habitat expands, but during the dry seasons they area of suitable habitat decreases and they become more concentrated. Males have larger home ranges than the females.

They are a shy secretive deer, spending most of their time close to reed beds, which act as protective cover. They have a number of predators including jaguars and anacondas, but the main threat to their survival is man.