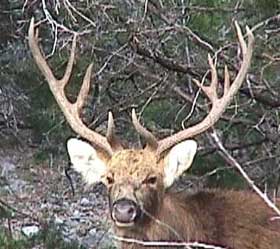 The name Barasingha is derived from the Hindu words for ‘twelve ends’, referring to this deer’s many tined antlers, which usually has 12 tines, but can have up to 20 in some animals. The Barasingha is a high-legged deer, with a short head that has long broad ears. The hooves are long and broad. The summer coat is a yellowish brown colour, but in the winter months is darker in colouration. Some individuals have whitish yellow spots scattered over their coat. The hair around the neck can be longer, forming a shaggy mane; this is most noticeable in the winter months. The face has a dark mask. As mentioned the antlers have many tines. The antlers are cast mostly in February.

Mostly found in marshy and damp areas, such as reed beds and marshes. It is usually found along rivers, and close to water. They can also be found in open parkland like environments, usually close to a source of water.

The Barasingha had a wide distribution across the whole of the Indian peninsula, however its populations have fallen because of habitat loss and over hunting. The areas in which it lives, are often areas of potential agricultural value, and as the Indian population has increased more habitat has been lost to make way for food production. It is now restricted to isolated and scattered locations in Nepal, Assam and the northern areas of India.

The Barasingha has a loud barking call which is used to signal danger, and which is similar to the roe deer’s. It feeds by day, but will rest during the hottest times. In winter large groups form, but in the summer these split into smaller herds composed mainly of females and their current young. Mat these times the males live separately from the females in small bachelor groups. Barasingha are a very apprehensive and nervous deer, sensitive to disturbance, and easily spooked. They have a number of predators in the wild including the tiger.

Males have a very ritualised rutting behaviour. The rut starts in October. The males compete with each other to mate with female harems. Males fight by facing each other at a distance and lowering their antlers so they are pointed directly at their opponent, They then often scrape the ground with their hooves, before racing at each other and clashing the antlers together. Eventually one of the males will retreat, leaving the victor in possession of the female herd. The males have a distinctive 2 syllable rutting call.

The pregnancy lasts 240 to 250 days, and the females give birth to one or sometimes two young. The young are spotted, but the spots fade as the young grow. 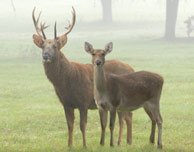 Barasingha have a lifespan of up to 20 years.

Barsingha eat predominantly wetland plants and herbaceous plants which they find in there natural habitat. They also graze on various types of grasses.