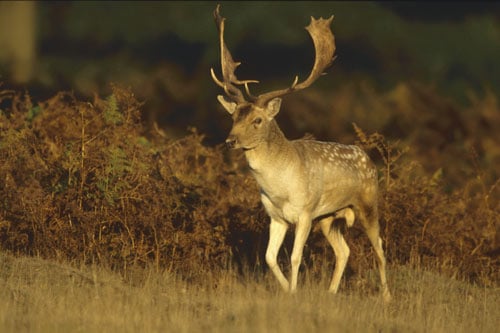 The Fallow Deer is a slender medium sized deer. It is quite distinctive in appearance because of its characteristic markings. It is not as stocky as many other species of deer. The legs are long and slender. The head is thin and narrow, and carried by a long neck. The Fallow Deer has a graceful appearance, which along with its placid temperament has made it a popular parkland deer.

The summer coat is distinctive in colouration and patterning, most animals have flanks that are a pale chestnut brown colour, these are dappled with white or creamy coloured spots. The belly and lower parts of the neck are white. The insides of the legs are also pale in colour or white. The summer coat is short and shiny. The winter coat is longer and much drabber in colour, growing from late autumn onwards. During the winter months the coat is much darker in colour than the summer coat and the flank spots disappear. The winter coat is moulted n spring around April or May.

The rump patch stands out well and is a large white disk of fur, that is bordered by a black rim. The tail is long and has a black tip, making it conspicuous against the white of the rump patch.

Although most animals are a chestnut brown colour, there are a number of different colour variations. All black or all white animals are not too uncommon. Some animals are what is known as having a ‘menil’ coat, which is a richer colour of brown and which has many more white spots than is normally seen.

Males, which are known as bucks, are larger and heavier in size than the females, or does. The bucks tend to have larger more muscular necks than the females. Bucks also carry antlers, which the does do not. The antlers grow afresh each year. They are lost or cast in March or April, and a new set begins to grow straight away. The antlers reach there full size by about August and are ready to use in the mating season about a month later.

During and shortly after the last ice age Fallow Deer were found in North Africa, Asia Minor and parts of the Middle East and Balkans. However early hunting by man soon reduced this range until they were found only in Asia Minor. Ancient sailors such as the Phoenicians introduced it to new locations around the Mediterranean and increased its range. The Romans continued this process. Later still nobles stocked their hunting estates with Fallow Deer and further increased its range during the Middle Ages. In Victorian times it became a popular parkland animal of rich gentry.

Today the Fallow Deer is found in many European countries. It remains a popular parkland deer, and is also often kept in deer enclosures. There are also a large number of wild living populations. Although the Fallow Deer can be found in many areas, its distribution remains somewhat scattered and localised. They have also been introduced outside of Europe, notably into the USA.

The Fallow Deer was originally a deer of open woodland and forest, being found mostly amongst woodland glades and openings. It has adapted well to living in parkland conditions, where there is light tree cover.

Semi-wild or captive deer have a maximum lifespan of about 11 to 15 years. Wild living Fallow Deer doe not live as long and are lucky to reach the age of 7 or 8 years.

Fallow Deer are mostly grazers, feeding on grasses and a variety of herbaceous plants. They also often feed on trees and shrubs. In areas where they are kept they will eat the lower parts of trees as high as they can reach, giving them a distinct shape.

The breeding season, or rut as it is known as in deer, takes place during the late autumn and early winter, usually between October and December. During the rut the males become extremely exited and form small territories that they mark and fiercely defend from other males. This behaviour is known as ‘lekking’. Bucks can be extremely vocal during the rutting season. The males attempt to collect together and breed with small groups of females. Bucks may fight over females using their antlers in ritualised contest to determine which male is strongest.

The fawns are born after a 230-day long gestation period. Each female usually bears a single fawn, mostly around the month of June. The fawns are left by the mothers in long grass or in concealed clumps of vegetation, the fawns remain motionless, waiting for the mother to return, which she does several times a day to allow the fawn to be suckled. The fawns remain hidden for the first 2 to 3 weeks of their life, after which they begin to accompany their mothers. The newborn young have spotted coats that helps them to remain camouflaged in long vegetation. They are weaned at 8 months of age, and become sexually mature form a year of age, with the males reaching maturity slightly later than the females.

Fallow Deer are gregarious animals, living in small herds. The sexes live separately, with the females and the young living away from the male herds. Older males are typically more solitary. Within the herds there is a strict dominance hierarchy, with certain individuals leading the group to new locations to feed and rest. Feeding mostly takes place at dawn and dusk, with Fallow Deer resting throughout much of the day. The Fallow Deer is not territorial, herds moving freely within large home ranges, which overlap with those of other herds. When kept in parks or enclosures, Fallow Deer can become remarkable tame and undisturbed by the presence of people, however this belies the secretive and timid ways of wild living animals. When alarmed they give out a short barking alarm call.