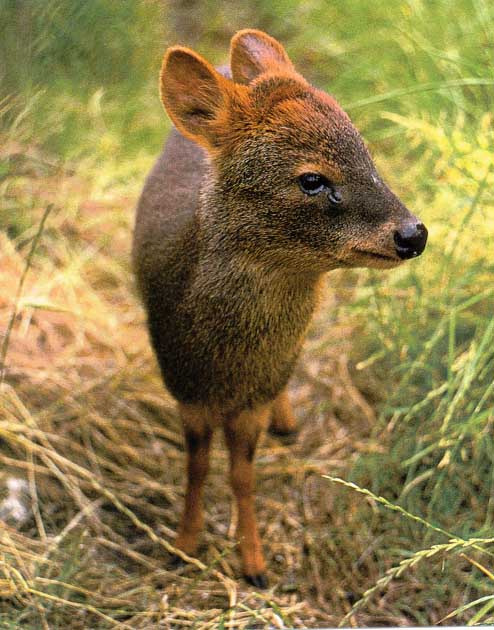 The Southern Pudu is the smallest of all the deer species, and is one of the smallest of the ungulates. It is similar in appearance to the Northern Pudu, the main physical differenace being that the Southern Pudu is smaller. The coat is thick and rough, and in colour is a browny black colour. The tail is short, and the ears are small and rounded. The antlers are small simple spikes. The antlers are cast in July and August, and begin to be regrown immediately. The pre-orbital scent glands are large and prominent in this species.

The Southern Pudu is found in South America, where it has a more southerly range than the Northern Pudu and is found in the southern Andes of Chile and Argentina.

The Southern Pudu is more adaptable and flexible in the types of habitat in which it will live than is the Northern Pudu. It lives on high mountainsides of up to 2,000 metres, but can also be found at much lower altitudes, and can be found along the coast. Rather than living in open habitats, it prefers woodlands and forest that offer it a good degree of cover from predators. It will however, venture out into more open habitats to feed.

Because this species lives at a fairly low latitude its lifestyle is influenced by the seasons, and its reproductive cycle is seasonal. The rutting period occur in early Autumn, in the months of April and May. After a 200 to 210 day long gestation period, usually a single young is born. This has a brown coat that is spotted with white, and which acts as camouflage from predators. The young are weaned at 3 months of age, and become sexually mature from a year of age.

The Southern Pudu lives in small family groups. It uses traditional pathways through thick vegetation, sometimes forming small tunnels. They live in small territories. It is a shy secretive animal. It normally feeds in the early morning or in the late afternoons. They have a number of predators.