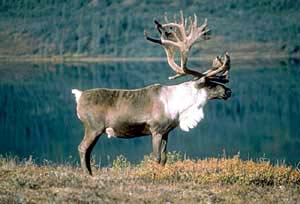 The Reindeer lives in the cold tundra of the far north, and is well adapted to this habitat. It is a medium to large species of deer. Like many of the animals living in cold climates its outermost extremities are reduced in size. The ears and tail are small to prevent excessive loss of heat. The body is solid and muscular but the legs are short, giving it a stocky compact appearance.

Reindeer possess a number of special adaptations to the cold climate. For example male Reindeer develop a thick layer of fat beneath the skin that helps store energy and provides insulation. The fur of the feet is especially long, acting like treads, thus helping it to have a firm grip on slippy and icy surfaces. The feet themselves are very broad, allowing the reindeer to move quickly over snow without sinking in.

The size and shape of the antlers can vary considerably between animals. Usually the antlers grow in a long curving arc, first backwards but then curving back to point to the front again. The antlers can have various numbers of tines. At the end of the antlers may be a short part that is flattened into a short blade.

There are several subspecies of Reindeer. 3 subspecies are found in Europe, and 4 in the Americas. In the Americas this animal is known as the Caribou, while in Europe it is called the Reindeer. Some authors use the term Caribou to refer to all wild living animals, and the name Reindeer to refer to those animals that are semi domesticated. 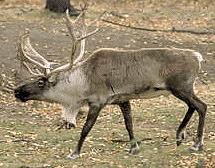 Reindeer are found in the northern coniferous forests and the open barren tundra plains of the far north. They have a circumpolar distribution range and are found across northern Europe, Asia and North America.

The maximum lifespan of wild living Reindeer is between 10 and 15 years, however few animals reach this age, and the average maximum age for Reindeer is about 4 years. Predation, insects and the climate are the main factors causing early mortality.

Reindeer have a hard life finding enough food to survive. They choose the best and richest plants so that they can obtain enough energy. In the winter months Reindeer are famous for feeding on lichens, and during the winter they will scrape snow away from these so they can feed. They are well known for feeding on one type of lichen, which is known as the Reindeer Lichen Cladina rangiferina. In the summer the diet is much more varied and they will feed on a variety of grasses and herbaceous plants.

In Reindeer the rutting period takes place between September and October depending on the location. In any one place the rut only last a few days, and the exact timing of this depends on the latitude at which the reindeer live. Mating is very competitive; males try to collect together a small number of females, which they can then mate with as they come into season. Other males will try to fight other males for the possession of these small groups. Fighting may occur with the males locking their antlers and trying to push each other away. Usually the most dominant male wins these contests and obtains possession of the females. Successful males may be able to collect together as many as 20 females.

The gestation period is 210 to 240 days long. Normally only a single calf is born. Most of the young are born in June. At birth the calves weigh 5 kg. The calves are able to walk within an hour of birth. They have to become mobile quickly because of the danger of predators such as wolves or bears. Growth occurs quickly, with the young reaching 35 kg by October. The mother’s milk is especially rich and high in fats. The young are suckled by their mothers for 4 to 5 months, but start to eat green matter from only a few weeks of age. Sexual maturity is reached from 2 years of age.

The Caribou of North America are famous for their long migrations. At the beginning of spring they form into large herds that can number into the tens of thousands. These herds move slowly northwards towards the traditional calving grounds and away from the boreal forests. After the calves are born the Caribou continue northwards to new feeding grounds on the tundra where they spread out and spend the summer. As autumn approaches they begin to collect together into herds again and move southwards again to find shelter from the harsh winter weather. When they reach the forests they disperse and try to find shelter and food beneath the trees.

Two main things cause this migrationary behaviour. Firstly during the summer months the tundra area becomes alive, and is an excellent resource of food for the Reindeer. By moving northwards the Caribou can take advantage of all this food that no other animals can use. Another factor causing them to move northwards are the numerous airborne parasites that attack the Caribou. As spring starts these begin to hatch out and attack the Caribou. Insects like midges will bite Caribou and try to suck their blood, this can cause the Caribou to lose a large amount of blood and weaken the animals considerably. Other insects may lay there eggs on Caribou and when these hatch out into maggots they eat into the Caribou causing injury and death. To avoid these attacks Caribou move northwards where it is cooler. On the open plains there is more wind that helps to blow insects away.

However, not all Caribou migrate, many populations are sedentary and remain in the same place all year around. The most famous migrations occur in Alaska and Canada. Reindeer is northern Europe and Asia are less migrationary in behaviour. 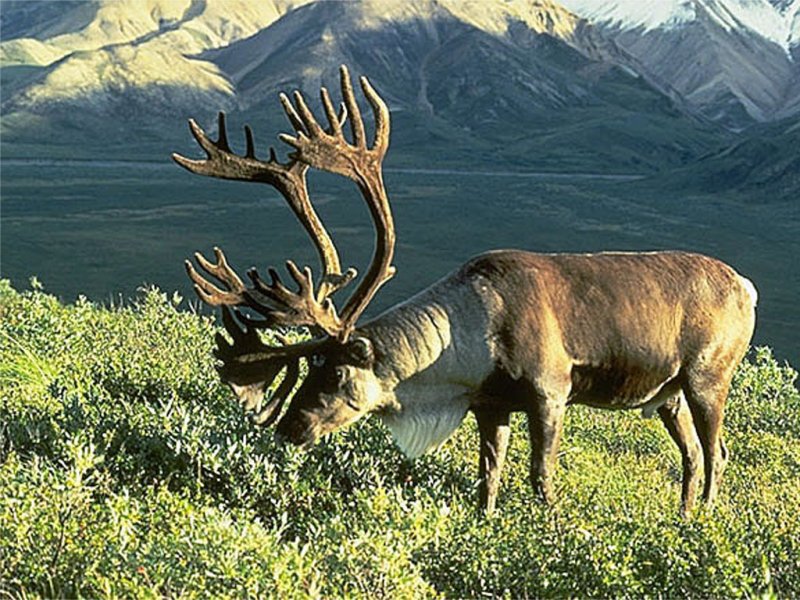 The Sami people of Northern Europe have semi-domesticated the Reindeer herds of northern Scandinavia. The herds of Reindeer are still free to roam where they like, but they are followed by the Sami people. Each family owns a herd of reindeer, which they hunt for meat and skins, and even milk. The Sami people are one of the few remaining nomadic people remaining in the wild, having to follow their reindeer wherever they decide to go.