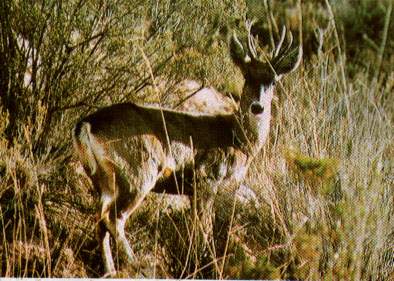 The North Andean Deer has a variety of names such as the Peruvian Guemel, the Peruvian Huemel and the Taruca. It is very similar in appearance to the South Andean Deer, the main difference between the speices being the form of the antlers. In the North Andean Deer they branch close to the rose and the skull, while in the South Andean deer they branch from a small stem further along their length. The antlers are between 20 and 30 cm in length. They are cast after the rut each year on October or November and begin to grow again immediately. They are fully grown by the following March. In stature the North Andean Deer is a small, short-legged deer. The coat is rough and thick, and in colour is a greyish brown. There are white markings around the throat. The ears are large and rounded with white insides. The tail is short, and unlike that of the South Andean Deer the underside is brown and not white in colour.

As its name suggests the North Andean Deer has a distribution somewhat further north of that of the South Andean Deer. It has a wide range across the northern Andes mountain chain, being found in Peru, Bolivia, Chile and Argentina. It is still relatively common but populations are under threat and declining. This is because of over hunting by man, and also because of competition from domestic livestock that is forcing it out of some of its natural habitats.

A mountain living deer, the North Andean Deer is found on high and steep mountainsides, being found on the Alpine habitat band between the tree line and the snow line. They occur typically at elevations of 3,000 to 5,000 metres.