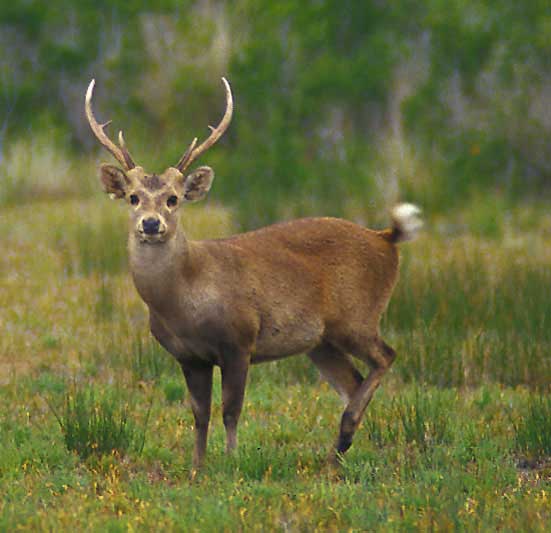 The Hog Deer has a rather stocky appearance, having short legs and a muscular body. This rather pig like stature resulted in it being given its name of the Hog Deer. The coat is a dark brownish colour. And as is seen in some other Cervid species a dark black stripe runs down the spine from the neck to the base of the tail. Males tend to be darker in colour than the females. The males grow antlers which have three tines and which grow up to 60 cm in length. As the Hog Deer is a tropical living species of deer the antlers can be cast and regrown in any season of the year. The tail is of medium length, the upperparts being brown in colour, while the under parts are white.

The Hog Deer is found in northern India and Pakistan. It is also found in parts of southeastern Asia. Its range and numbers have however fallen, because of over hunting and habitat loss. Most populations are now highly scattered and only small in number. The areas in which it prefers to live in are often suitable for human cultivation and settlement, and as the human population in the region has increased so the Hog Deer has disappeared from many places.

The Hog Deer likes areas with good levels of cover near to rivers and marshland areas. It can be found in dense reed beds, thick riverside vegetation and close to swamps in woodland. It does not like areas of very thick woodland and forest.

The mating season takes place from September to December. Unlike other species of deer the Hog Deer does not try to collect together a harem of females with which to mate with, instead mating with a succession of females as they become receptive. Males fight fiercely using there antlers for the right to breed with females. Only the most dominant males get the chance to breed. The gestation period is about 220 to 240 days long, after which mostly a single calf is born. The female gives birth in a concealed location, mostly within thick vegetation. The calf remains hidden, and is visited by the mother to be suckled for the first few weeks of its life. After which time it begins to accompany the mother. The young are spotted at birth, but these spots fade as the calf grows and matures. The young reach maturity from about a year of age.

The Hog Deer is mainly a solitary deer, rarely being seen in groups of any number. Females may be seen with their young, and males may be seen with females during the rutting period. They spend most of their time hidden in thick vegetation, only emerging during the hours of darkness to feed on various grasses, herbaceous plants and riverside vegetation. When frightened they emit a whistling alarm call and flee to dense vegetation. When fleeing they tend to charge into dense vegetation with their head held low, while other species of deer would tend to leap over any obstacle. This strange behaviour is more reminiscent of pigs and may also be a reason for its name.