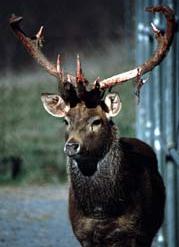 This deer is known by a number of different names, including the Brow-antlered Deer, Eld’s Deer, Thamin and even as the Dancing Deer. Here they are referred to as Thamin. The Thamin is a medium sized deer, similar in appearance to the Barasingha, to which it is closely related. It is a very majestic species, possessing the usual elegant Cervus stature with long thin legs, a long body and a large head on a thin neck. Stags are larger and heavier than the females.

In summer the coat is a reddish-brown colour, while the winter coat is darker and is a dark brown. The coat looks course and rough, especially around the throat of the males where a thick mane of longer hair forms. Males tend to be darker in colour than the females. The tail is short in length. There is no distinct rump patch.

The most distinctive feature are the impressive antlers of the stags, which are many tined and can be as much as 2 metres in length. Most stags have antlers with 12 tines, but sometimes animals can be seen with antlers with over 20. The antlers grow in a distinctive lyre shape; growing backwards in a long arc. Instead of growing upwards they tend to grow outwards and then inwards. The brow tine is especially long and noticeable which lead to them being named as the Brow-antlered Deer.

Thamin population’s numbers and distribution range have declined dramatically over the past 200 years. This has been partly because of over hunting, but mainly because of habitat loss. The Thamins preferred habitat is open parkland areas or light woodland, near to rivers or wet marshy land. It is not found in thick forest or woodland. These areas are also ideal areas for cultivation. As the human population of the area has increased, so Thamin numbers have fallen and they have been forced out of their old habitats.
Originally Thamin were found across northern parts of India and into southeastern Asia. They were found in the countries of India, Myanmar, Thailand, Vietnam and southern parts of China. Today all three subspecies are at serious risk of becoming extinct. Around 200 Manipur brow-antlered Deer are found in Keibul National Park in loktak lake in the Indian State of Manipur. 2,000 to 3,000 of the Burmese Thamin remain in scattered locations within Myanmar. The Thailiand Brow-antlered Deer is found in in Eastern Thailand and on the Chinese Island of Hainan, the population numbers for this subspecies are unclear but thought to be low.

Thamin have a maximum lifespan in the wild of around 10 years.

Rutting takes place in the early spring months between February and May. Males compete with each other to gain control of a harem of females that they can then mate with. After a 220 to 240 day long gestation period, normally a single calf is born. The young are spotted at birth; these spots fade as the animal grows. The young are weaned at 7 months of age, and becomes sexually mature from 18 months of age onwards.

The Thamin is thought to be similar in lifestyle to the Barasingha, although this is uncertain, as few detailed studies of its behaviour have been conducted. It appears to live in separate sex herds of up to 50 animals. The males joining the female herds during the rutting season. The Thamin feeds on a variety of grasses, herbaceous plants and wetland living plants. The Thamin is mostly nocturnal.

Like other species of deer the Chinese Water Deer is an herbivorous ruminant. Chinese Water Deer are highly selective feeders, taking the most nutritious foodstuffs that are available. They prefer to feed on rich shoots, herbaceous plants and grasses in preference to poorer quality coarser foods. They feed on a wide variety of plants including grasses, shoots, woody stems, herbaceous plants, brambles and aquatic plants. They have a wider diet in summer when more foods are available than in the winter. Most feeding takes place at dawn and at dusk.

Most wild living Chinese Water Deer live to be no more than 6 years of age, however it is known that they can live to be over 10 years of age. The rate of mortality is especially high for young animal, with a very high percentage dying in their first year.

The Chinese Water Deer can be an extremely prodigious breeder. Litter sizes can be impressive, with up to 8 young being born, this is however exceptional. Usually litters are much smaller in size, with mostly between 1 to 3 young being born. Litters with 4 young are however not too uncommon.

The mating season, known as the rut or rutting season for deer species, occurs each year between late November and early January. During the rutting season males establish small territories, which contain a single doe. The bucks mate with the doe as she comes into season and is receptive. Bucks fight amongst themselves for the best territories, sometimes using their sharp canine teeth. When in possession of a territory, bucks will fight intruding males. The bucks mark their territories in a number of ways. Faeces and urine are used, and secretions from the eye glands are rubbed onto bushes or trees. The bucks will sometimes dig small scrapes in the ground, which they then urinate on.

Unlike many other species of deer there is a distinct process of courtship between the buck and his doe. Males have a whistling courtship call which they use to attract the female. Before mating with the doe, the buck will smell the female to judge whether she is ready to be mated, this is done with a ritualised display where the head is rocked from side to side. If the buck believes the doe to be in oestrus he will then mount her and mate with her. The males and females will remain together for 2 to 3 months.

The young are born the following May or June after a gestation period of between 200 and 210 days. The newly born young weigh about 1kg, which given the low weight of the adult females is quite heavy, especially when more than one young is carried. The young are spotted at birth, but these spots fade at about 8 weeks of age. After the birth the young are hidden in thick vegetation. When more than one young is born each one is hidden separately on its own, but in the same vicinity as its siblings. This is safer than all the young hiding in the same place. If a predator were to find the young when they were all together they would all be killed. If they are hidden separately although a predator may find one of the young, there is a chance that the other siblings would escape detection and thus survive. A case of not leaving all your eggs in one basket.

Most activity is concentrated around the hours of the dusk and dawn. This is when most feeding takes place. Throughout most of the day Chinese Water Deer hide and rest in dense vegetation. When alarmed they emit a loud bark like alarm call and quickly run away.

They lead a mostly solitary life, for much of the year living alone. An exception to this however, is in areas where particularly high densities occur, and then sometimes they live in pairs. During the rutting period in late winter they become more sociable and are more frequently seen together. At this time the pair bonds between the males and the females are formed. Sometimes in the winter month’s large groups may collect in places that are an abundant source of food such as on arable fields.