How Far Can Deer See?

Understanding deer eyesight and vision is essential for hunters, deer enthusiasts, and anyone who’s interested in these majestic animals. One of the most common questions hunters ask is how far can deer see? The idea is that if you’re out of a deer’s sight range, you’ll have a better shot. But the reality of how and what deer see is a bit more complex.

If a deer were to sit for a regular eye exam, it would have 20/100 vision. This means that a deer sees 20 feet away as well as a person with normal vision sees 100 feet away. However, deer have some meaningful advantages that we don’t.

This article is an in-depth look at deer sight. Here’s an overview of what we’ll discuss:

How Far Can Deer See at Night?

Deer cannot see as far into the distance at night as they can during the day. There just isn’t enough light for their eyes to be able to see as well.

However, deer are able to absorb more light than humans at night. This means that they do have a certain advantage over humans when it’s dark outside.

Moonlight heavily influences a deer’s ability to see at night.

Moonlight is a reflection of sunlight.

During a full moon, a deer will have much better vision than a crescent or new moon.

If there are more reflective surfaces, a deer will have an even better chance.

Snow and water all reflect light. So, if it’s a winter night in a snow-covered field, a deer will be able to see pretty well.

This surprises most people since deer are known for getting caught in the headlights. But this is because deer freeze from shock when there is a sudden excess of light.

They are so inundated with light that they can’t see the car.

How Far Can a Deer See in the Woods?

Deer in a heavily forested area find it a bit more difficult to see. This is because deer are partially colorblind.

Deer cannot see the same range of colors as most humans. Because of this, it becomes difficult for them to distinguish between objects.

In a forest, trees and bushes and leaves are all crowded together. It can be hard for a deer to discern what’s what.

In fact, orange is one of the colors that deer can see the least well. So, if you wanted, you could wear all orange.

Since camouflage blends in so well, you might be wondering why hunters wear orange or red vests.

The main reason for wearing orange or red is safety.

Luckily, deer have red-green colorblindness. As a result, they perceive red or orange as green or gray.

The red or orange vest will make sure that other hunters (as long as they’re not colorblind) will know you’re a human being and won’t shoot you.

There are two main differences between human vision and deer vision.

The first is that deer have a wider range of sight than humans. To visualize this, think about the positioning of your eyes.

Your eyes look straight ahead. You probably have some peripheral vision, but you can’t see sideways or backward.

Additionally, the human eyeball has a limited range of motion. It’s also impossible for humans to split their vision.

In other words, humans have to look with both eyes together.

Many animals can have one eye looking in one direction while the other is looking somewhere else, increasing their field of vision.

Their eyes also have a wider range of motion, enabling them to see more clearly out of the corner of their eyes.

So, while you can only look straight in front of you, a deer could be looking almost behind itself!

This eye positioning is common for prey animals for whom survival depends on detecting predators.

The other main difference between human eyesight and deer eyesight is how deer see movement.

Deer can’t see still objects very well, but they’re much better than us at detecting movement. In this way, their eyesight is similar to that of a T-Rex.

How to Get Close to Deer Without Being Detected

Staying still is key to getting close to a deer. There are hunters who claim to have been right next to a deer without being detected.

This is probably because they are standing perfectly still.

Deer have better hearing than humans. As soon as you make the slightest movement, whether it be stepping on a branch or even a heavy breath, a deer will hear it.

This animal is more likely to hear you before it sees you.

Don’t talk while you’re hunting unless you need to, only whispering if necessary. Try to move as little as possible.

Pick out a good spot to hide and wait for deer. Once you’re comfortable, you’re less likely to move.

Another way to get close to a deer is to mask your scent. Hunters will often return to the same place over and over again so that deer become accustomed to their smell.

Deer have very keen noses. They can tell the difference between a human and deer scent instantly.

If you aren’t able to visit your hunting spot regularly, you can use a spray to mask your scent. 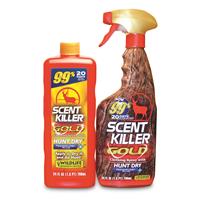 WorldDeer.org is reader supported and may earn a commission at no additional cost to you.

Is it Better to Hunt at Night or During the Day?

Deer won’t be able to see as well at night because there is less light. However, they are better adapted to darkness than humans.

So, they will be at an advantage unless you’re using nighttime goggles.

The best time to hunt deer is probably at dawn or dusk. Deer aren’t nocturnal, they are crepuscular animals.

This means that they are most active at sunrise and sunset. Unlike humans, deer don’t sleep through the night.

Deer always have to be on high alert for predators. If they slept for long periods as we do, they would be easy prey for wolves and other hungry predators.

Most hunters prefer to head out before sunrise. Deer tend to be more active in the morning than at twilight.

And your visibility conditions will only get better. This becomes particularly advantageous if you have to find your deer after shooting it.

Deer won’t always perish instantly. They can run up to 100 yards after being shot with an arrow before they die.

If that happens, you’ll have to spend time looking for the body. That’s definitely something you want to do during daylight.

Either way, you’re going to have to carry the deer back. And that’s going to be easier when you can see.

As we learned earlier, deer vision isn’t as good with detail at a distance as ours is. However, these cervids do have certain advantages. These include:

One thing is for sure: deer have much better hearing and a superior sense of smell than we do.

To review, deer have a wider field of vision than humans. However, they cannot see as sharply as we can.

They have difficulty seeing still objects and are red-green colorblind.

You May Also Enjoy:

When Do Deer Give Birth?
Can Deer Swim?
Do Black Bears Eat Deer?
Do Deer Move in the Wind?

WorldDeer.org is reader supported and may earn a commission.