The Bawean or Kuhl’s deer is very similar to the Hog Deer. Many scientists consider it to be a subspecies of the Hog Deer rather than a separate species in its own right. The main difference between it and the Hog Deer are that it has a smaller head and that the legs are shorter in length. It has a dark brown coat, and white markings underneath its chin and throat. The tail is long and bushy with a white underside. The antlers are similar to those seen in the Hog Deer having three tines, but do not grow as long. They are found only on the Indonesian island of Bawean where they have only a small population. They are threatened because of habitat loss, they forests they live in are disappearing to make way for new farms. Rutting takes place between September and October, and a single calf is born 180 to 200 days later in the following April or May. The Bawean Deer is a shy secretive creature, which is nocturnal in habit. It lives singly but can sometimes be seen in pairs. 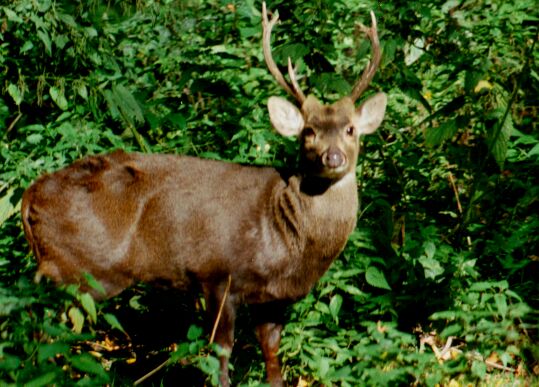